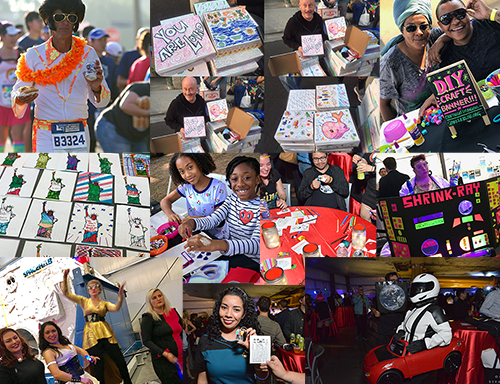 Here’s what we’ve done so far:

April:  Ran a Shrink Ray at Yuri’s Night underneath Space Shuttle Endeavor, and made beautiful little centerpieces for the VIP Section and also manned the VIP section

June: Colored/Decorated hygiene kits for the homeless with the Organization Down But Not Out, they were given to folks in DTLA.

All Year Long: CraftNight every Wednesday, teaching arts and crafts to the masses, now in it’s 16th year! We’ve been having some earlier workshops before the crafts, we had the Red Cross come talk with us about disaster preparedness, had therapists from the LGBT Center come in and talk about self care during these turbulent times, and we’ve been collaborating with martial arts expert, Cory Klink, teaching self defense.

We’re quite pleased that we’ve cleverly tricked over 1000 Angelenos into crafting, cheering, handing out chili dogs, painting, dancing, writing postcards, writing letters, attending self defense classes, helping the homeless, using a shrink ray, coloring, marching in parades, being together, connecting with each other, and creating beautiful artistic chaos. Our lives are designed for contribution, therefore, we’re not sitting on our laurels one BIT. What’s coming up for the rest of the year? Oh… you’ll see (evil arty laughter here…)